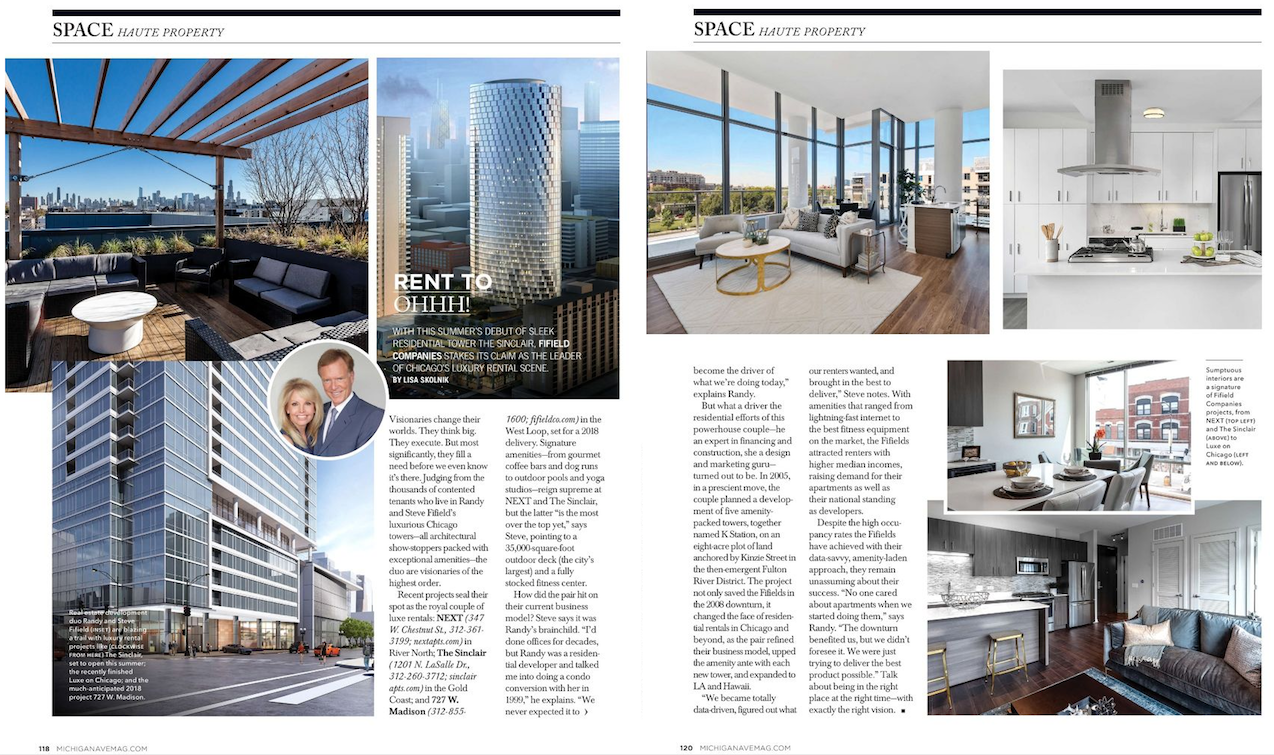 This Article written and published by Michigan Avenue made Steve and I blush. Thank you Lisa Skolnick and Michigan Avenue Magazine. We have been called a lot of things but ” The Royal Couple” never entered into our equation.

Truthfully, I met Steve wanting to build apartments with him. He, at the time, was a prolific office developer badly wounded by a crushed commercial market.

He invited me to lunch, and I peppered him with questions like a reporter, taking in every detail of how he started, deals, finance, his stops and his starts. He did NOT want to build apartments at the time, and while he loved building office buildings, the market was done for the cycle. We walked many apartment buildings, but his heart was not in being a residential landlord.

We talked about opportunity, rent growth and urban factors. People want to own homes he said. He kept trying to convince me to love his business of office buildings. The idea of building an office building was not appealing.  And then, The Civic Opera deal presented itself. Steve could be the comeback kid and while I was not getting apartments, we offered a gentle rental program to lease an office like “WeWork” and we filled the building with amenities beyond any other.

It became our first commercial deal together. We created an environment with it all, so that you did not have to leave the building. Restaurants, a private club, a bank and convenience store, a printer (those were the days everything was not online,) a hair salon, a gym, a theater for presentations that could sit over 100 people was refurbished and concierge services were offered along with having the Lyric Opera.

In the beginning, we were so broke I remember putting up the holiday decorations I purchased from Franks Nursery and Craft with my daughter, Alexa, in her baby stroller and the security guard watching faithfully as I climbed my ladder. The next morning tenants walked in amazed. I love taking good care of people. Steve called and said I had done such a nice job that the tenants were in awe walking in. They loved my Santa Claus on the entry desk, the wreaths, the tree. Mostly they loved that their work place had the comforts of home.

We have had a lot of ups and downs in our years together. Each article wants to make it seem as if there is division in our responsibilities. Steve has his ideas about design and I get involved in finance–it is not as clear cut as a writers mind wants to organize. There is arm wrestling, lawyers and an entire team of people that have a say on what we do and how we do it. Nobody really wants to know about the discipline, the fundamentals, the heartache, or that we actually spend more time evaluating and then reevaluating what we need to fix even after a building has opened.

Our constant toiling, analyzing the data, along with that passion to get it right is seldom witnessed by the public and often questioned by bankers, lawyers, team players and beyond. Most days I feel like the janitor, update the landscaping, where are the financials, take down the signs, put up the signs, please clean the glass, we need to fix the elevators.  That does not sound “Royal” at all.

Our business is subjective and constantly evolving – we innovate and sometimes we win and other times we need to go back. Like the game “Shoots and Ladders”. One day you’re winning and the next day you’re starting over. Nobody really wanted Daisy the house dog at NEXT, but in 2016 she got more press than any one of us at the Fifield Companies and remains a terrific amenity.

One of the most interesting things that was ever said to me was “Well… you’re quite a girl, but what I like most is that you have bigger balls than most men I know in signing those completion guarantees and loans!”

On the day this article went live I was at odds with Steve over a private equity deal he was trying to put together. I was feeling more like Zena, the warrior princess, guarding the door.  After a lot of team talks I wrote the email to set our intentions on what was to sell, what was to stay, our mission for the next 6 months, and told Steve by email copying my lawyer rather than telling Steve to his face that I would NOT sign the private equity deal put in place.
Protecting yourself is necessary. It is a balance. Everyday it is a fine tuned high wire walk.

So Royal Couple??? What a compliment! It is terrific that what people can see is that under tremendous pressure, we prevail with our team and make it look easy.

At speaking engagements, in the press, and for awards, I really try to put our ladies and men forward more than anyone because for 30 years I have built homes and apartments, designed and financed more than my share. I want to inspire the young associates and show them all that their lives could be by believing that they too can make a trail and build the future.

I fall in love with each project and quietly keep my distance because in the end, one day, I will part from these deals because building them and running them daily are different jobs. You need to distance yourself and trust managers and engineers to do their jobs on the daily basis.

On quiet days I drive my kids around town and tell them the stories on each building. Being a self made woman I try to impart my wisdom to my kids. Their names appear on the beams in the structure and sometimes in the building names. Sinclair is my daughter Samantha’s middle name. My son Jack came to stay at Alta and we played basketball in the gym before the building opened all by ourselves. He said “Wow…you’re a cool mom! Thank you for building this for me.” It was heart breaking to tell him one day so many more people would be on this court and we would not be able to play like we did today.

The articles are fleeting. The big moments are but a few brief hours compared to the years it takes to build. These building will remain, and one day we will no longer walk the earth.

We own an office building at 600 West Jackson and my partner Erin Spears says quite often, “This is the best place I have ever worked. It feels like an extension of my home.” Her daughter Kennedy comes in for lunch daily. I am gently reminded of my life 23 years ago when my own daughter was in a stroller by my side as I decorated the Civic Opera building.

When I think of what Erin says, is it her physical space she is talking about or is she setting the example of how she with her daughter by her side will lead others?

I will let you decide.

All my love,
Randy 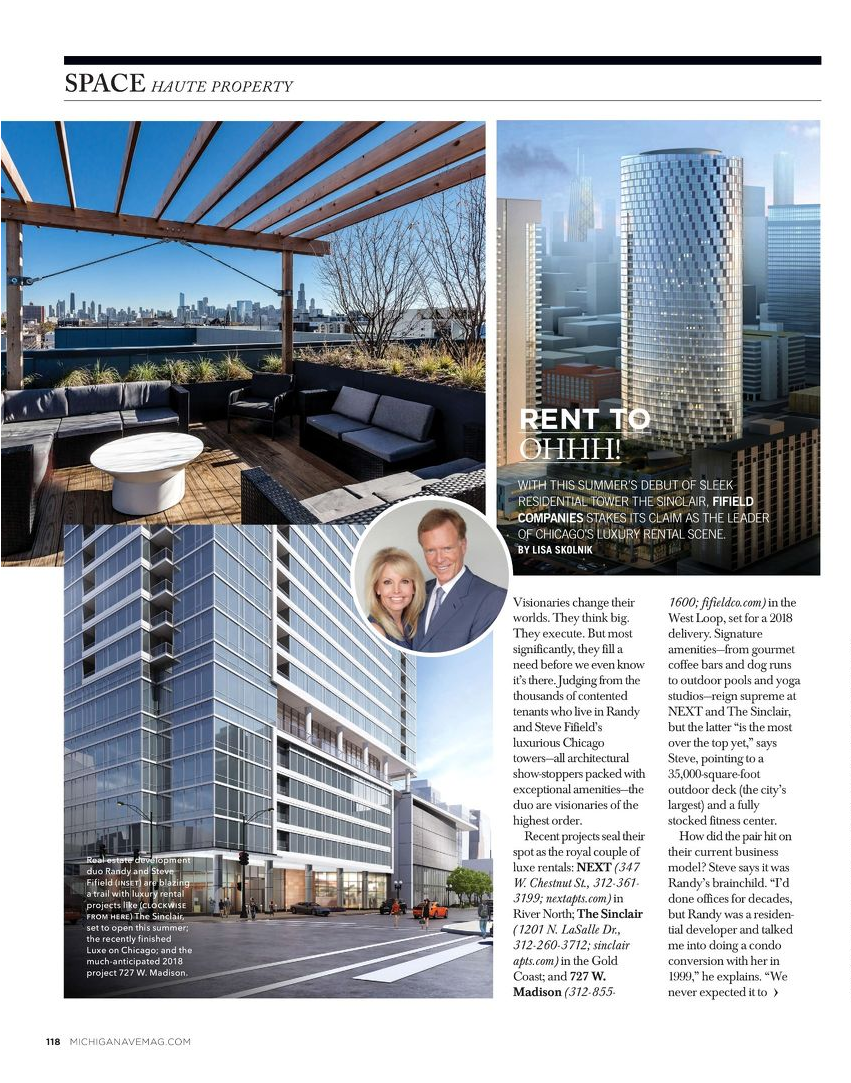 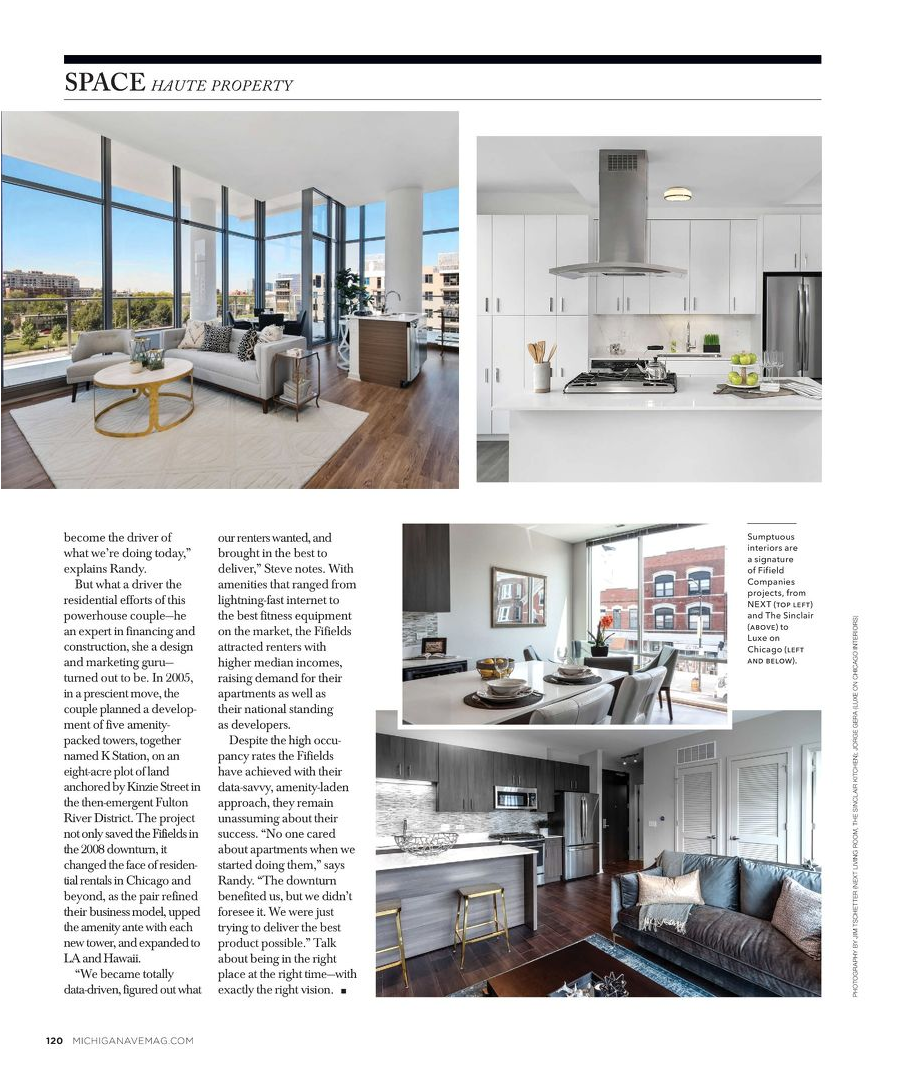